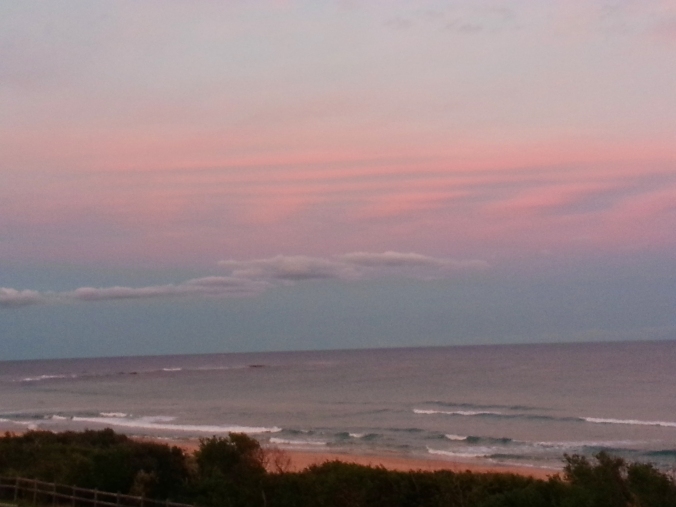 On a recent trip to Boydtown near Eden I realised that planning or waiting for the perfect time to holiday leads me to put off taking one. For some reason every school break throws up reasons why I can’t get away. It’s been fourteen years since I had a true holiday and my brother has pestered me to visit Wollongong ever since he moved there two years ago. So, when I booked out of the Seahorse Inn in mid-April I took the brave move of booking a family suite for four days in July and used that as an incentive to get myself into gear. I crossed my fingers that no emergency would throw my plans out. All you have to do is organise the dogs, get in the car and drive up the coast, right?

Concerned I wouldn’t get accommodation during the school holidays if I didn’t book well ahead, I researched online and found Bulli Tourist Park. I had to ring and then upgrade to get a cabin for 6 nights. Then I organised all our other accommodation needs.

I was a little daunted by the bustle of the traffic coming into Wollongong and unfamiliar roads but once I was on Memorial Drive, bypassing most of the built up areas, I easily found our turn off. From there it was two minutes to the beach and Bulli Tourist Park. Better still, Woolworths and other shops are just near the turnoff! We settled into our cabin then backtracked and did a food shop that very afternoon.

So far, our time at Bulli Tourist Park has been the best 6 days of the trip. Our cabin overlooks the ocean and has such a wonderful view. We also caught up on some much needed washing. It’s nice to have clean clothes again. The rooms are great; the layout of our 3 brm deluxe cabin is excellent. We used one bedroom to stash all our cases and junk. Everything is provided Linen, towels, soap, washing detergent for dishes and clothes is also supplied. The beds are good and the kitchen is well set up with a gas stove and oven, microwave, and washer and dryer. The balcony is wide with a BBQ and sink at one end. Pretty standard with cabins but we appreciate it.

The weather has been very good; a little windy at times but then it dies down and we’ve been able to spend some of each day without rugging up. Not bad for winter.

My brother and sister-in-law caught up with us the next morning taking us to breakfast at Sublime Point café on top of the escarpment. Breakfast was dreadful; toast and bacon hard and the coffee average. I even discovered egg shell on the toast. They served my coffee in a cup with lipstick stains on it and then had to be reminded of the tea that we’d ordered. They weren’t busy so God knows how they cope when they have more than three tables to wait on. And, we weren’t in the mood for average food. In fact, we were so desperate for “real home-cooked food” that I’d been up at 5:30 making chicken and vegetable soup.

The following night had a BBQ tea and seafood, and the family were as impressed by the cabin and the views as we were. It’s wonderful to sit at the kitchen table or on the balcony with a cuppa watching the surf, and all the people who use the footpath that runs between the park and the beach: walkers and runners, many with dogs and pushers, kids and families on bikes, or with boards or fishing gear. Early one morning I saw one guy free-wheeling at speed down the path, one hand on the handle bars the other holding a surf rod his body twisted to the side to balance it. Hilarious! I thought,  “that’s the way to go” although what he was going to do if he hauled in the big one I don’t know; hire a taxi or ring the wife perhaps? 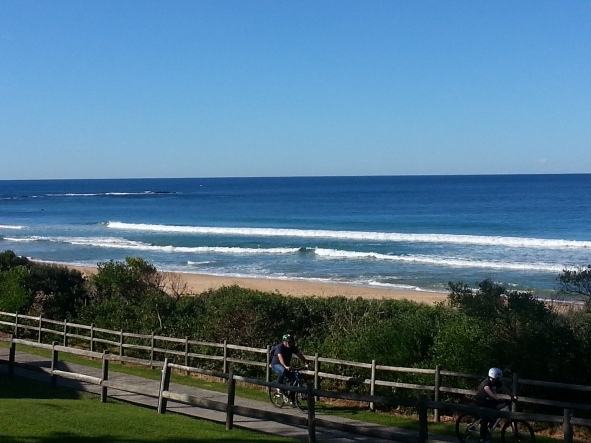 There are plenty of activities to interest visitors. Looking north of our cabin we could see the surfing school where you can learn to surf and there were classes most days. We also saw windsurfers and plenty of people skydiving. I think it has something to do with the escarpment and the thermals but equally it’s the great landscape views. Wollongong might be busy but it’s also very beautiful. And there’s something about the escarpment looming at the back of Wollongong. It takes a bit of time of getting used to it actually. No photo can do justice to the drama of the escarpment; not its sheer presence nor the changing colours that touch it like a fine mist throughout the day. It has to be experienced to be appreciated. However, it makes for very pretty drives both along the coast and inland.

Our adventures have been minor.

The electric kettle died on Saturday. I’m surprised it lasted that long. I have a thing with those electric kettles, the ones with the base that you sit the kettle onto. Breville or Sunbeam it makes no difference, I moz them all.

For those who don’t speak Aussie, moz means to jinx. Moz, curse, whatever, they just die on me. I stopped buying them because none of them lasted more than a few weeks. One didn’t even last three days. And you try returning kettle after kettle to the shop. It doesn’t look good! So I used a saucepan until I left it on one day and nearly burnt the house down. Finally I bought an old styled kettle, one you put on the stove and when it boils it whistles or screeches at you. We’ve christened it Moaning Myrtle, now affectionately known as Myrtle.

Anyway, I took the broken kettle to the office and the lovely lady at reception offered to give me theirs. “No,” I said, don’t bring it anywhere near me.”

“We can get you another one.”

“No, I don’t want it,” I wailed, and told her why. She laughed and obviously didn’t believe me because one of the groundsmen turned up the next morning with a replacement. I didn’t open it; just put it in the cupboard.

The heater has kept working and our cabin warm at night and early in the mornings. Most of our days were sunny enough that we didn’t need extra heating. Each day as I worked (my desk is the kitchen table) I’ve had the most wonderful views. I’m an early riser so every single sunrise was different. I’ve also noticed that there are no flies so you can leave the doors open. We have birds visiting our balcony and we’ve seen dolphins on two days feeding close in to the shore so it has been the most inspiring office to work in. There have been whale sightings too but we haven’t seen any.

For most of our stay there have been five large ships anchored out to our right (south) close to Port Kembla. Each day they seem to move position; they shift 90% or line up along the horizon and even do a 180% and face the opposite way.

Here at Bulli we’ve been able to truly relax. The park isn’t full of families on holiday as I anticipated and I’ve been told most people go to the snow fields during the winter. That suits us fine. I’ve been taking lots of photos while daughter Sheridan relaxed with her knitting and reading. I managed to get the full moon rising over the water although I didn’t have time to use a filter or tweak the camera settings. We were watching the sun set with all the changing colours on the water and in the sky. I looked up and saw this bright light onto the low bank of cloud surrounded by pinks and gold and thought it was the last rays of the sun playing some trick; the bending of light etc., and then the moon rose out of the cloud with the light of the sun still in the sky and on the sea but fading fast into those lovely blues you get before the light completely fades. The moon was huge and so deeply golden because of the position of the sun. It was a matter of grab the camera and take the shot. Even though I didn’t have much time I’m pleased with these “on the spot” snaps. 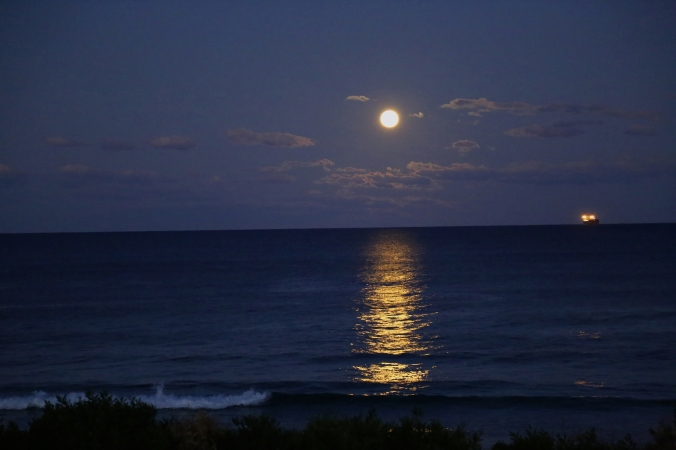 Sunday was our third full day here at Wollongong and my brother and sister-in-law took us to Bowral. You can read about our lunch at historic Milton Park in my next post.

“Painting is poetry that is seen rather than felt, and poetry is painting that is felt rather than seen.” Leonardo da Vinci